For a horror fan, is there any higher example of the genre than Stephen King? Don’t answer that with some really old or obscure reference that most people wouldn’t get. But seriously, though he can get overdramatic and his stories can go on a little TOO long, I really like King’s work. I think he’s got a great style, some really cool and creative ideas and a real knack for scaring the shit out of his audiences, from his humble start in the 70s to the modern day where he’s revered as a God of popular literature. Which he rightly deserves.

But really, are the movies based on his works any good? Some of them, like IT, The Stand and the Bag of Bones TV movie from last year, are pretty poor and underwhelming, and while not all bad, fail to capture what makes his books so great. Paradoxically this happens by sticking too close to the source material, which thus robs the movies of having any individuality or style of their own. While I understand wanting to stay faithful to the books and stories the movies are based off of, I think there is something to be said with taking creative liberties and doing one’s own thing with a popular story. Which is why the Children of the Corn movie is so good! 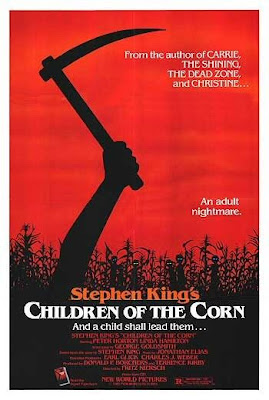 Yes, I actually do not hate this movie – is that a miracle of my review blog or what? Usually I rip stuff a new one on here. But this movie I actually thought was really very good. Oh, I don’t mean there’s nothing to make fun of; just that I don’t regret watching it like I do a lot of the other shit I’ve been watching lately for this site…let’s dig into this festival of eerie and campy horror fun, Children of the Corn.

We start off with some goofy narration from a little boy while we see a bunch of people in a diner slaughtered bloodily: 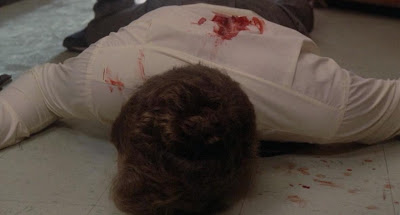 Charming…very charming. And oddly enough that does not scar the little boy for life as he just keeps on narrating as happily as he can overtop these morbid scenes. It fits about as well as peanut butter on a turkey sandwich. And if that wasn’t jarring enough for you, the next thing we see is THIS: 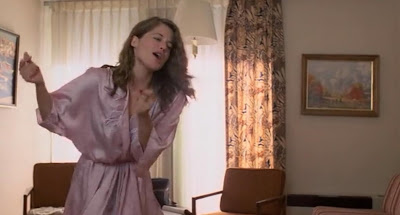 Yes, that’s right, we follow up a bloody death scene with another scene of Linda Hamilton singing an 80s pop song to her husband Peter Horton on his birthday. It’s weird, embarrassing and kind of creepy, and even Horton himself seems to agree as he puts the covers back over his head and tries to escape the reality of the crazy woman he married. Luckily she never sings anything again in the movie. And at least they’re not our main characters---

Dammit! So we have to put up with these two white-as-whitebread squares for the rest of the movie?! Yes, I just said “squares”…that’s what the sheer cheesiness of these characters has done to me…

Anyway, so we see two kids, Job and Sarah, ordered around by some other kid, and we learn that they’re not allowed to have any fun. They’re not allowed to play games, listen to music or even read anything, because it would be sinful. Apparently they aren’t allowed to take acting classes either, because these kids are about as credible as wooden planks! Acting classes truly are the work of the Devil. Why is everything good affiliated with Satan? It’s like the holy just can’t catch a break.

Then we see that kid who tried to leave get killed off and shoved in the road, right where our main characters Whitey Whitenson and his wife, Missus Whitebread, are driving along and slam right into him with their car – okay, their real names are Burt and Vicky. Happy? Anyway they think that they killed the kid at first, but Burt, being a doctor, figures out that he was already dead and was shoved out into the street by someone else. He goes to investigate, while Vicky has a dream that the kid in the road jump scares her in the mother of God of all jump scares:

So after that, we see Job and Sarah get captured by Malachi, the redheaded stepchild of the group. They get taken to Isaac, played by Cousin Itt from the Addams’ Family – yes, really. He looks like a wrinkled old man in a child’s body and when he talks it sounds like when you fast-forward a VHS tape and the voices get all high pitched. Truly the picture of fear.

We see him preaching to the crew of inbreds and miscreants that make up this ridiculous town, and all I can think is, is this what a Chick Fil A board meeting is like?

Burt and Vicky find a creepy old guy at a gas station who, when he sees them coming, says to his dog, “Ooh, a car, you know what that means!” Uh…no, I don’t know what it means. But I am suddenly reminded of another film that started off with a gas station and ended in brutal rape and murder exploitation. I sure hope this movie is a little less dark when it comes to the fate of our protagonists. I don’t really need to see rape scenes by a bunch of country kids in the middle of a cornfield, thank you very much.

So the guy tells them to go to this other town to use a phone to report the murder of that kid. So they drive around in circles for a while and get lost like every city-slicker does in the country. Oh how silly. Then SOMEHOW, they end up back at the gas station from before! Only they don’t realize that the kids killed the old man for disobeying them…yes, he was working for them. Why didn’t he just leave? Because I guess the prospect of being a flunkie to a bunch of crazy religious teenagers and ten year olds was just too good for this guy to pass up, and now, he paid for it with his life.

Burt and Vicky end up in this town where all the kids have taken over and turned it into a wasteland. They find Sarah the little girl in this one abandoned house, and Burt, being a doctor, is totally against talking to her with any kind of understanding or patience, like all good doctors are! Being tolerant of people who are afraid or confused just isn’t a very doctorly thing to do.

So Vicky gets kidnapped by Malachi and the kids while Burt ends up on the run. He finds a bunch of kids in a church drinking blood and all kinds of other stuff and calls them out on being weirdos and freaks. He then gets stabbed in the chest, and like all stab wounds, it’s just a minor annoyance and is easy to walk off, am I right? Maybe his doctor powers allow him to avoid getting stabbed too fatally or something. Or maybe the knife was just made of corn husks…I dunno.

Meanwhile in crazy nutso corn-religion land, they decide they don’t like Isaac anymore and prefer the only slightly different mode of religion that Malachi has, which is more aggressive and involves more teeth:

Burt goes running through the town and teams up with Job and Sarah to hide in an old bunker that apparently, was once used to hide from Communists. Now wait a second. So Burt is already in this crazy town full of kids who are trying to kill him, and he just TRUSTS THIS KID without a second thought? He doesn’t even consider that it could be a trap? How does he know these kids are trustworthy at all? And what’s the point of entrapping yourself further underground? You’re out in the open country! It can’t be that hard to find some place where they can’t find you! Hiding underground where they can just surround you just seems…stupid!

Ugh, okay, so Malachi takes Vicky hostage and parades her through the streets, threatening to kill her if Burt doesn’t come out. They eventually just give up and take her back to the cornfield anyway, alive still, so I guess they’re a bunch of pussies or something. Burt shows up and confronts them and ends up fighting with Malachi and beating him. That comes to an abrupt end when Isaac, who is tied to a cross with corn husks all around it, is eaten by what looks like early MS Paint diarrhea:

That sends everyone running for their lives, but Malachi is pulled back by a demonized Isaac and apparently gets killed.

Burt and Vicky and everyone else hide out in a barn, which…is apparently immune to the wrath of the giant pissed off demon outside? Huh. I guess wood and hay are its only weaknesses. Whodathunkit. Burt goes outside and ends up torching the damn thing with a Molotov cocktail. You know, I think I do like this guy after all.

They adopt the two kids and walk back to their car, only to find one last Child of the Corn waiting for them with a pitchfork, so Burt hits her in the head with his car door, because abuse to children is OK if they’re crazy and religious! And on that note the movie just ends. I should be annoyed by how abruptly it ends, on that abusive note, but it’s just so funny to me, and at least they didn’t waste their time with any bullshit epilogues or drawn out “sequel bait” cliffhangers. That’s always cool.

So Children of the Corn is goofy and campy, but it’s also awesome. The atmosphere is killer, evoked by some eerie shots of cornfields both in the daytime and at night – and it’s surprising how scary this is even when most of the film takes place during the day. The kids, while not GREAT actors, do get the job done and manage to come off as legitimately creepy rather than just silly. The main characters are both good, with real personalities and as an added bonus, they actually DO things rather than just letting things HAPPEN to them, which is a big problem a lot of horror movies have. By avoiding that pitfall, this movie has a lot of drive and momentum and remains consistently exciting all throughout its duration.

There are some plot holes, sure, which I’ve made fun of here, but it was all out of love, trust me. And hell, compared to a lot of stuff I review, this was one hell of a tightly constructed movie. It’s not perfect and could have been even darker and bleaker, but as it is, Children of the Corn is a classic. If you haven’t seen this yet, get on it! Stat!

Pics copyright of their original owners. None of 'em are mine.
Posted by Lawrence Griffin at 9:20 PM